Tipping the scales: Exploring austerity and public health in Ireland

Tipping the scales: Exploring austerity and public health in Ireland 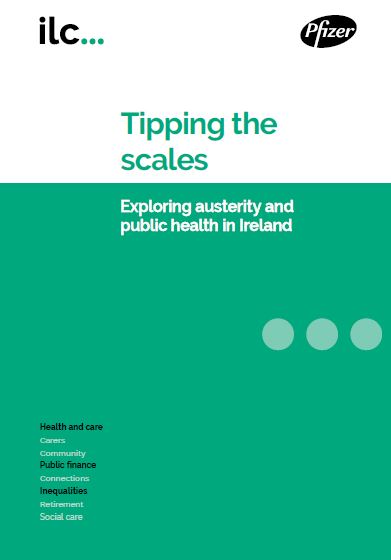 This report is part of a series of country profiles outlining the situation of public health in four key countries particularly impacted by the fallout from the financial crisis. The series is a follow-on from the ILC report Public health in Europe during the austerity years, which explored the link between health outcomes and austerity across Europe. Focusing on the situation in the UK, Greece, Spain, and Ireland, this series explores the economy and public health of each country during the austerity years.

Despite recent improvements in the health of the Irish economy, the health system has endured a sustained period of stalled funding.

During the austerity period, the risk of poverty grew from just over 20% in 2007 to 32% in 2012 for people aged 18-64. Evidence also suggests that the depth of coverage diminished, as spending on hospital charges and medicines rose between 2009 and 2014.

Even though there was a slight increase in the proportion of people reporting poor health, the rate of those reporting either bad or very bad health in Ireland is low. This may indicate that public health has managed to cope with some of the increased strains associated with economic challenges and austerity.

Overall, there is little evidence to suggest that cuts in health service resources had a significant impact on mortality rates in Ireland. The reality is that the full impact of these trends may not be seen for many more years.