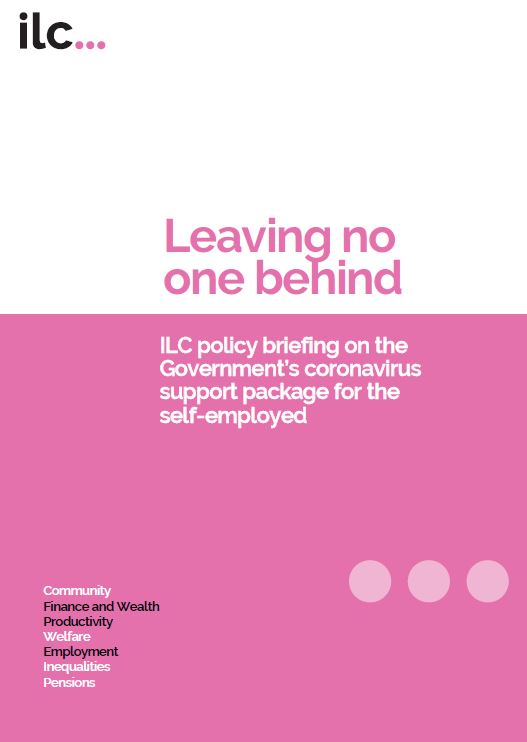 Last week, the Chancellor announced Government plans to introduce an income support scheme for self-employed workers equivalent to 80% of their income – up to a maximum of £2,500 a month.

While the ILC welcomes the Chancellor’s announcement to support self-employed workers amid the coronavirus crisis, the support package risks excluding a sizeable number of older workers who are already in a vulnerable position.

A significant proportion of older workers are self-employed and among these, a sizeable number may be ineligible for any support. This could unintentionally disincentivise longer working lives and further disadvantage the retirement incomes of the self-employed.

Full-time self-employed workers aged 55+ earn less than younger workers (aged 24 or over), and over £100 a week less than their employed counterparts.

Although many older workers will have an adequate financial buffer to protect against income shocks, a significant subset, particularly among the self-employed, where 23% of such workers are in relative poverty, do not. They will struggle to get by with no or delayed support except piecemeal offers of Universal Credit.

Nearly 60% of carers in England and Wales are aged 50+ and 65% of older carers (aged 60–94) have long-term health problems or a disability themselves.

Older workers are also likely to be vulnerable themselves or caring for someone more vulnerable to coronavirus alongside these financial pressures.

ILC believes that no one should be left behind, but these arbitrary criteria for support risk doing just that. As a growing number of workers transition to self-employment in their later years, we need to ensure they are not forgotten, and feel supported to work for longer and have sufficient savings for retirement.

In doing so, we can maximise the growing economic impact of older workers. Our Maximising the longevity dividend report, published in December last year, found that those aged 50+ earned £237bn in 2018, and could be earning £311bn (40% of total earnings) by 2040. As such, it is absolutely vital that we get this right, and realise the potential longevity dividend.

Prevention and the social determinants of health

END_OF_DOCUMENT_TOKEN_TO_BE_REPLACED

Ageism and ableism in the workplace