Youth vote only matters in a handful of constituencies

Youth vote only matters in a handful of constituencies

Research conducted by the International Longevity Centre (ILC-UK) has suggested that only 11 constituencies would have had different results in the 2015 General Election, had turnout rates of those between 18-34 matched that of the population over 65.

ILC-UK will present the research at a debate on the topic of “if young people ruled the world”, on Monday 22nd May (Voter Registration Deadline day).

Using data from Ipsos MORI and the ONS, it was found that 9 Conservative and 2 Liberal Democrat constituencies (including the seat of Nick Clegg, former deputy Prime Minister) would have swung to Labour, had the voting turnout of those between 18-34 matched that of the over-65’s and if these new voters reflected the national trend. 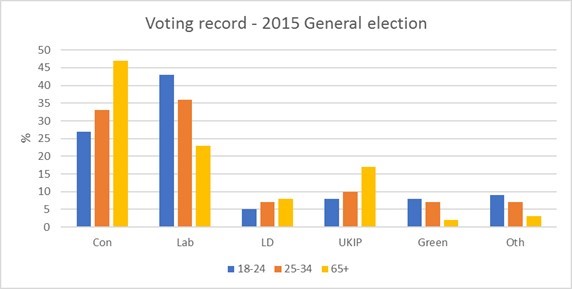 There are several reasons why the youth vote has such little influence:

The 9 Conservative seats which would have swung to Labour are: Plymouth, Sutton and Devonport, Derby North, Croydon Central, Gower, Brighton, Kemptown, Thurrock, Vale of Clwyd, Morley and Outwood, and Bury North.

The two Liberal Democrat seats which would have swung to Labour are: Leeds North West and Sheffield, Hallam.

Attempting to get young people to vote through the promise of more influence is likely to be unhelpful in terms of long-term engagement, which is the key issue.

While voting is incredibly important, it is important for young people to engage in politics, to make their case for policies among the wider and older electorate. ILC-UK is calling for automatic registration, so that all eligible UK citizens, regardless of age or any other factor can be guaranteed a vote.

“Democracy isn’t something that stops when you leave the voting booth, it has enormous influence over our everyday lives. While attempts to get young people to vote are encouraging, we need to do more to stimulate active engagement in politics. An ageing society is going to put more pressure on government resources and voters will be taking this into consideration when they cast their ballots.

The challenge for young people is how do they take their case to the rest of the electorate for policies that are going to benefit their generation and build a more inclusive society. This might not be the easiest task, but it will be impossible if young people continue to be left out of the political debate.”