Toward zero transmissions: Preventing HIV in England with PrEP

Toward zero transmissions: Preventing HIV in England with PrEP

As our lives are reshaped by the coronavirus pandemic, the government has been working at pace to adopt policies to protect public health in the face of the crisis. But the coronavirus is not the only area of health policy that has seen new policy developments. This month, the Department of Health and Social Care announced a new policy to help prevent HIV by offering pre-exposure prophylaxis (PrEP) to high-risk individuals across England as of April this year. PrEP is one preventative strategy for avoiding HIV and involves taking approved antiretroviral drug combinations that have been well-established for clinical use.

In our Never too late: Prevention in an ageing world report, published last month, we found that the number of years lived with a disability due to HIV among people aged 50+ in better-off countries had risen by 232% between 1992 and 2017, with a further 86% forecasted increase up to 2042. 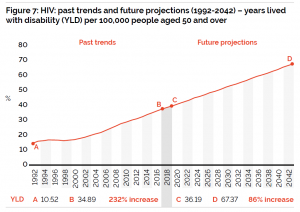 Advances in treatments for HIV also mean that more people are living with HIV well into later life. Given the history of the virus and its associated therapies, more and more people are ageing with HIV, which raises new questions and requires new approaches to support those with the virus across their life courses.

Our Never too late: Prevention in an ageing world report found that, in an ageing world, the social and economic costs of failing to act to prevent the spread of HIV across the life course are too high to ignore. Indeed, our research revealed that among those aged 50-64, HIV costs better-off countries $4 billion (£3 billion) in sick days, presenteeism and early retirement every year.

Advocates have been fighting for the availability of PrEP for several years after a number of international trials (e.g. IPERGAY and PROUD) demonstrated that, with proper use, it is highly effective at preventing new transmissions of HIV. PrEP first became available through health systems in the United States in 2012, with many countries around the world having since made it available, including Australia, France, Israel, Kenya, Peru, and South Korea among others – and now England.

PrEP provision in the UK

In the UK, Scotland led the way in offering PrEP from June 2017, while a three-year pilot programme began in Wales in the same month. In September 2017, an Impact trial began in England providing PrEP to 10,000 people (subsequently extended to 26,000); there was no cap on the numbers in the Welsh pilot. Following a pilot in Northern Ireland, it was announced a full roll-out would begin in 2020.

Efforts to deploy PrEP across England have faced various barriers despite the unequivocal evidence and acceptance among the international medical community that PrEP is highly effective. In fact, the Impact trial in England is not designed to assess effectiveness but to gain a better understanding of the implications of rolling out broader availability.

The substantial drop in new HIV diagnoses in the UK (and London in particular) has strengthened the evidence that PrEP is a vital tool in the government’s aim to reduce HIV transmissions to zero by 2030. Public Health England reported that new HIV diagnoses were at their lowest level in 2019 since 2000. Between 2015 and 2018, there was a 39% decline in new diagnoses among gay and bisexual men and a 24% decline related to heterosexual contact. The largest proportional decrease – 50% among gay and bisexual men – was recorded in London. These declines have been attributed in part to the availability and use of PrEP.

PrEP is a pill, not a panacea

While the roll-out of PrEP in England is good news, HIV – like all viruses – does not discriminate. The fact that PrEP will be a new tool for preventing HIV in England does not mean the battle is over. There are specific eligibility criteria people must meet to access PrEP, usually linked to sexual health history and current sexual behaviour. This may exclude large segments of the older population. PrEP is therefore just one part of the strategy to reduce HIV and improve the population’s sexual health; education remains key.

Moreover, there are questions around the extent to which health professionals recognise that older people have active sex lives, and ageism – unconscious or not – can stifle conversations with older people about healthy sexual behaviours and awareness of sexually transmitted diseases. This neglect can put people at risk in later life and undermine efforts to reduce HIV transmissions to zero by 2030.

However, for those of us personally attached to the history of HIV/AIDS – a history often characterised by fear, anxiety, and stigma – PrEP can play a significant role in helping people feel their own agency and a sense of control over their own health. The new policy to make PrEP available across England from April will allow thousands of people to better protect their health and instil greater equality in sexual health services across the whole of the UK. This will help ensure everyone’s voice can be heard as the band plays on.

Since 2018, ILC has been involved with the HIV Age Positively campaign, which seeks to raise awareness of HIV in later life and provides grants for innovative services and initiatives to improve the lives of all people ageing with HIV.

More information on ILC’s Prevention in an ageing world programme can be found here.

To learn more about the modern face of HIV and AIDS in Europe, Politico.eu has an excellent series available here.

Brian joined the ILC in June 2013. In this role, he has conducted research on a range of topics related to population ageing, such as loneliness, serious illness, and housing, with his main expertise relating to the issues around employment in later life. He has worked on this subject and the changing nature of retirement for over 13 years, and has been an active member on various strategic and advisory groups with universities, the voluntary sector, and government as they examine older people and the world of work. His engagement with Parliament included three appearances before Select Committees since 2017, providing oral evidence on employment in later life and housing for older people.

Who is being left behind in the delivery of the COVID vaccine?

END_OF_DOCUMENT_TOKEN_TO_BE_REPLACED

Does the death of notes and coins risk the longevity dividend?