Never too late: Prevention in an ageing world

Never too late: Prevention in an ageing world 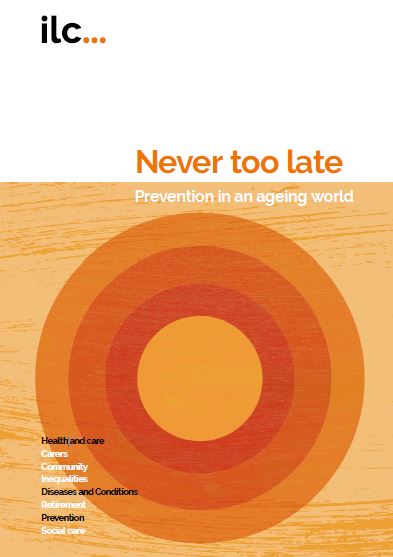 Following a year-long programme engaging policymakers and thought leaders across the world on Prevention in an ageing world, this report explores how health care systems can better prevent ill health across people’s lives.

The report finds that in better off countries, in 2017 alone, 27.1 million years were lived with disability due to a number of largely preventable age-related diseases, with years lived in poor health set to increase by 17% over the next 25 years, if governments fail to prioritise preventative health interventions right across the life course.

Among those aged 50-64, these preventable illnesses cost better off countries $692 billion (£532 billion) in sick days, presenteeism and early retirement a year, composed of:

Governments across the world have repeatedly stated their commitment to prevention across the life course – from support for the WHO’s Decade of Healthy Ageing to G20 statements affirming the importance of prevention.

However, despite the clear economic and social benefits of investing in prevention, preventative services are often the first to be cut in times of crisis and remain consistently low at an average of 2-4% of total health spend across OECD countries.

The report argues that in order to follow through on commitments to prevention, governments need to: