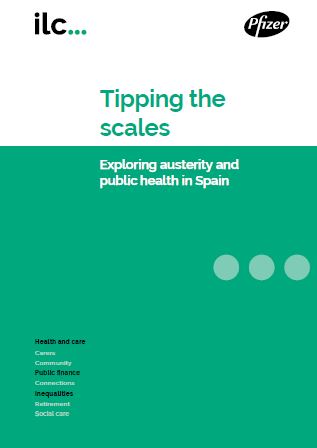 This report is part of a series of country profiles outlining the situation of public health in four key countries particularly impacted by the fallout from the financial crisis. The series is a follow on from the ILC report Public health in Europe during the austerity years, which explored the link between health outcomes and austerity across Europe. Focusing on the situation in the UK, Greece, Spain, and Ireland this series explores the economy and public health of each country during the austerity years.

Spain experienced a “golden decade” in the years between 1997 and 2007. This was brought to an end with the bursting of the housing bubble, along with the impact of the global financial crisis.

During the period of austerity, Spain’s health system was transformed to an employment-based insurance model, which significantly limited accessibility for people during a time of unprecedentedly high unemployment. As a result, many residents lost their entitlement to comprehensive care. The number of prescriptions dropped significantly in Catalonia and Valencia during the first 14 months of the 2012 reform.

The reduction in government health expenditure led to a decrease in healthcare facilities. The proportion of people reporting bad health also fluctuated between 2008 and 2015, although it remained smaller than that reported between 2005 and 2008.

The data does not show any immediate impact of economic recession and austerity measures on deaths related to chronic illness. However, the full impact of the recession and subsequent cost-cutting measures for social inequalities and public health in Spain remains to be seen.