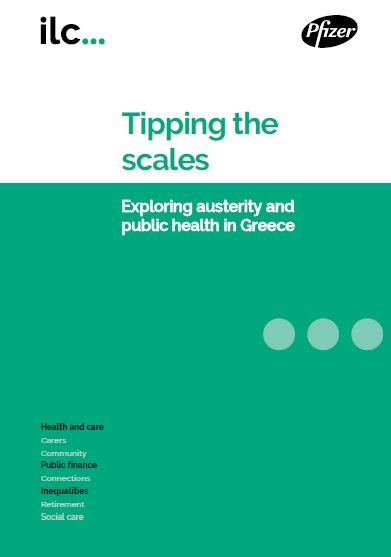 This report is part of a series of country profiles outlining the situation of public health in four key countries particularly impacted by the fallout from the financial crisis. The series is a follow-on from the ILC report Public health in Europe during the austerity years, which explored the link between health outcomes and austerity across Europe. Focusing on the situation in the UK, Greece, Spain, and Ireland, this series explores the economy and public health of each country during the austerity years.

The Greek economy was exposed by the financial crisis and markets reacted negatively, plunging the country into economic chaos. The severity of Greek austerity that followed makes it a unique example to study how public health has evolved under adverse economic conditions.

Overall, there has not been a significant increase in reports of poor health during the austerity years in Greece. However, the financial crisis was associated with a worsening of self-rated health in Greece.

Moreover, health outcomes have worsened with respect to the prevalence of infectious disease. This has been impacted by cuts to prevention spending of around 13%. Despite significant and persistent reductions in health spending throughout the austerity years, mortality rates have actually declined at a faster pace than before the crisis. Ultimately, the long-term impact of the crisis and subsequent austerity on the Greek health system remains to be seen.