The Persistence of Poverty across Europe

The Persistence of Poverty across Europe

More than 120 million Europeans, the inhabitants of one of the wealthiest regions of the planet, still live in poverty.

In 2010, the European strategy for growth, Europe 2020, made reducing poverty and social exclusion one of its main goals.[1] And yet, despite some recent progress, 1 in 4 people living in the EU28 still struggle to pay their rent, mortgage or utility bills; fail to keep their home adequately warm; cannot cope with unexpected expenses; do not manage to eat meat or proteins regularly; cannot afford to buy a TV, a washing machine, a car, or a telephone.

At ILC-UK we strongly believe that national governments can and should do more to eradicate poverty. However, to accomplish such as daunting task, governments need to ensure the welfare strategies they adopt are effective.

Different nations have chosen different approaches to welfare across Europe; but how do they know if the strategies they have chosen actually work?

To answer this question, a recent report from the ILC-UK presented an empirical investigation using historical data from the region; the report identified a group of welfare strategies characterising each country, and then assessed their impact on a weighted index of Poverty and Social Exclusion.

The Poverty and Social Exclusion Index was derived by combining information on relative poverty rates by age group; the prevalence of NEETS (young people Not in Education Employment or Training); pensioner well-being.

Table 1 illustrates countries’ ranking along the Poverty and Social Exclusion Index – with countries ranked at the top attaining the best results in terms of poverty reduction, and countries ranked at the bottom attaining the poorest. Table 1 also shows changes over time (between 2003 and 2013), which may be indicative of successful alterations to welfare strategies or demonstrates which strategies are the most sustainable.

Switzerland and the Nordic countries – Iceland, Norway and Sweden – are the most successful in their pursuit of eradicating poverty, while Poland, Hungary and Turkey still have a lot of work to do. However, Poland can take some comfort in the knowledge that it has improved its ranking by 5 places between 2003 and 2013, suggesting that it has taken great strides to eliminate poverty in the last decade.

In fact, many of the Eastern European nations can be seen as success stories, with the Czech Republic and Slovakia making huge improvements in the last decade. Conversely, Germany, Luxembourg and Slovenia have fallen down the rankings. 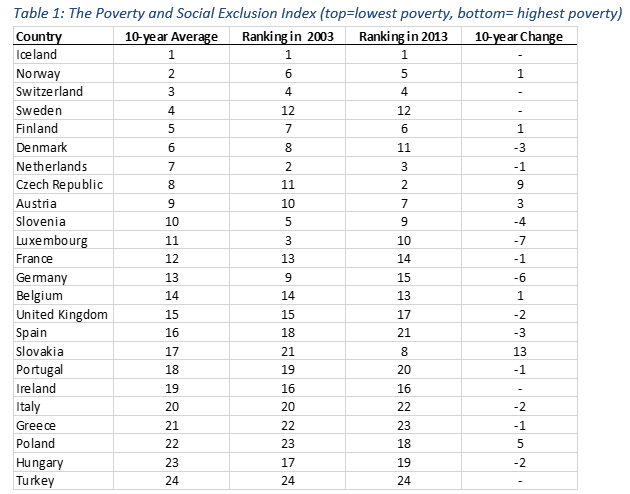 However, rankings along the Index are merely one side of the story. What we are really interested in is to understand what welfare strategies are driving the rankings.

Figure 1 shows that five out of ten welfare strategies are related to higher rankings on the Poverty and Social Exclusion Index, four are related to lower rankings, while one has no association.[2]

The ‘winning’ strategies – Education for all; Innovative healthcare and sickness benefits; Hospitalised healthcare; Work before welfare; and Welfare for families – involve higher state involvement in education, healthcare and social protection, as well as policies fostering larger participation of older workers (aged 55+) in the labour market. By contrast, the ‘losing’ strategies – Towards private education; Public expenditure on housing; Towards private healthcare; and Silver welfare – generally consist of higher levels of privatisation in education or healthcare, and the provision of generous benefits to the older population to the detriment of the younger generations.
Not all countries sitting at the top of the ranking pursue the winning strategies, just like not all countries sitting at the bottom pursue losing strategies. For instance, Italy, France, and Austria are all characterised by the losing strategy ‘Silver welfare’; however, France and Austria also pursue some winning strategies, such as ‘Welfare for families’, or ‘innovative healthcare and sickness benefits’, and are therefore mid-ranked. Conversely, silver welfare is so predominant in Italy that little social protection is left for the younger generations, and this most likely contributes to Italy’s low rankings on the Poverty and Social Exclusion Index. 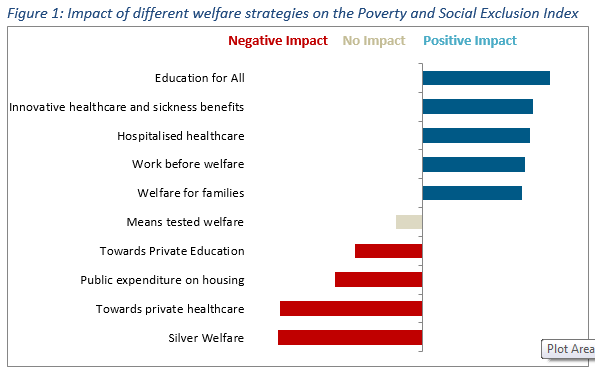 Source: authors’ elaborations using Eurostat and OECD data. The graph summarises results from an OLS regression, whereby the Poverty and Social Exclusion index is the dependent variable and the welfare strategies are the independent variables, controlling for year effects and the age structure of the population.

Clearly, there are many other elements that influence countries’ ability to reduce poverty and social exclusion other than the welfare strategies identified in the report. Each country has a different history and different socio-economic structures; however, the analysis provides a good starting point and a useful framework for further discussion. By allowing us to identify which nations are making improvements and which are faltering, the Poverty and Social Exclusion Index has great potential as a policy guidance tool.

Cesira Urzi Brancati currently works at the Joint Research Centre (JRC) -Seville, European Commission. Cesira does research in Economics and her current project is on the labour market impact of the collaborative economy.
See: https://www.researchgate.net/profile/Cesira_Urzi_Brancati