The rise of the minnows: it’s social attitudes, stupid.

The rise of the minnows: it’s social attitudes, stupid.

At the two extremes of the political spectrum our analysis shows that its is social attitudes, rather than economic attitudes, which drive voting decisions

In the following analysis we have taken into account other factors which could impact on political beliefs including; gender, income bracket, household size, region and education levels.

UKIP
The chart below plots Economic Attitude on the horizontal axis and the probability of Voting UKIP on the vertical axis[1], with the lines illustrating the relationship between economic attitudes and voting intention for people aged over 65 and those under 65. As we would expect for a right wing party, for both age groups believing in a less interventionist state increases the probability of a voter choosing UKIP. However the impact of economic attitude is not huge. As we move from those who think the state should shrink to those who think that the state should grow the probability an individual will vote UKIP decreases by less than 8 percentage points. 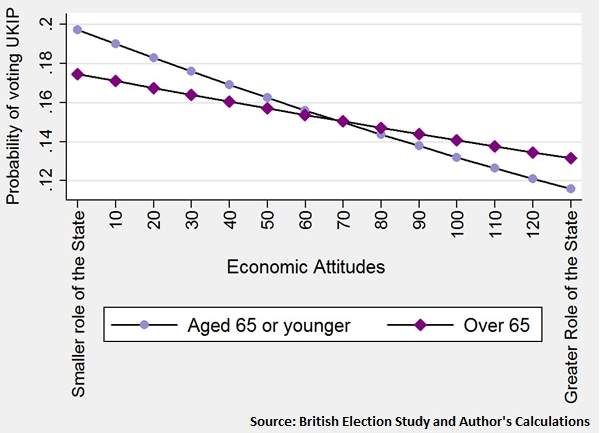 However there is difference between younger and older voters. The lighter line, representing the under 65s, has a steeper gradient showing that economic attitudes are a more important factor in younger voters choosing UKIP. Differences in economic attitude among older individuals have less of an impact on their decision to vote UKIP.

The differences in economic attitudes between younger and older UKIP voters raise interesting questions about the future of the party. Many view the surge in support of the party as unsustainable, with the over 65s being UKIP’s core supporters. Future generations of older voters, with their more liberal social attitudes, may not see the appeal of the party. The graph above hints that UKIP could draw much-needed support from younger voters by promoting economic policies which favour limited state involvement.

The chart below shows the relationship between social attitude, on the horizontal axis, and the probability of Voting UKIP, on the vertical axis[2]. Here there is no age difference – social attitudes matter in the same way for both older and younger voters. The less socially liberal are much more likely to state a preference for UKIP. Social attitudes are far more influential in an individuals’ decision to support UKIP than economic attitudes, with the probability of voting for UKIP increasing around 30 percentage points as we move from those who are socially liberal to those who are socially conservative. 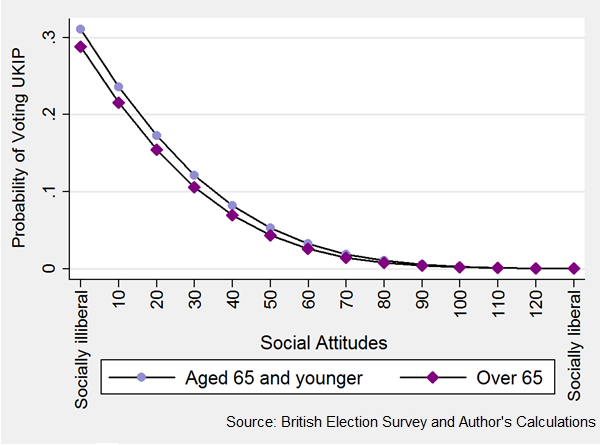 The Green Party
Now to look at another party which has enjoyed a surge in support over the past year: the Green Party[3]. Perhaps predictably, our analysis shows that individuals with a more interventionist economic attitude favour the Green party. The graph below shows an increase of over 10 percentage points in support for the Green Party as we move from those who favour less government intervention to those who favour greater government intervention. This is true for voters of all ages but the Greens key support comes from younger voters – a person under 65 is more likely to vote Green than a person over 65, even if they hold the same economic attitudes. 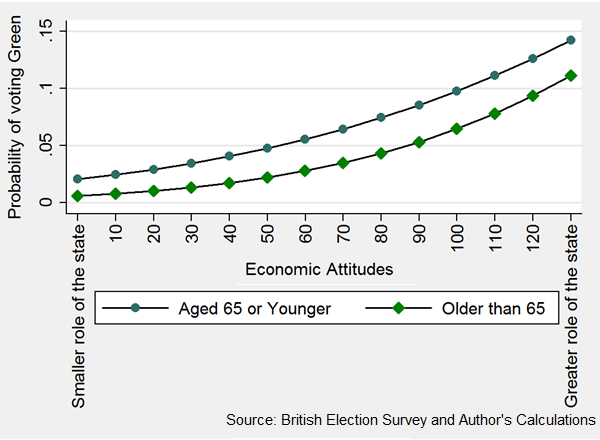 But, as with UKIP, the real determinant of the Green vote is social attitude. The graph below shows that as we move from individuals who are socially conservative to socially liberal the likelihood of voting for the Green Party increases by over 20 percentage points. This effect is particularly marked among for voters under 65. 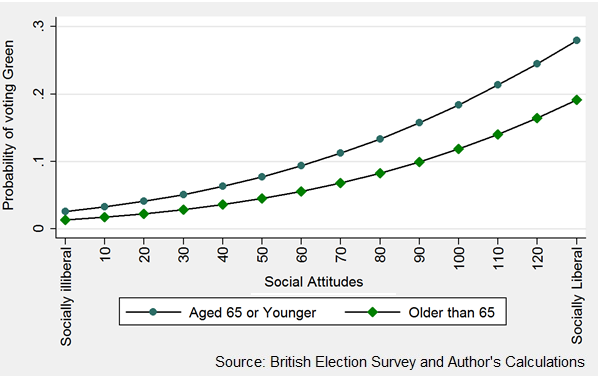 On the face of it UKIP and the Greens do not have a lot in common. But for supporters of both parties, social attitudes play a far more influential role in their political decisions than economic attitudes.When it comes to support for both the Greens and UKIP, gut feeling triumphs over economic statistics.

END_OF_DOCUMENT_TOKEN_TO_BE_REPLACED

Do we need specific human rights for older people?