The generation game – is it really a competition?

The generation game – is it really a competition?

By: Dan Holden and Dean Hochlaf

A focus on intergenerational inequalities risks side-lining the importance of other inequalities, including intragenerational, and may lead to the misjudged policy solutions.

As eye-catching as some of these idea are, they rely on a central idea which obscures many of the complexities of societal inequality in the UK today. By focusing on the inter-generational angle and funding £10,000 pay-outs to 25-year olds at the same time as levying National Insurance on those aged 65+, the Commission is using a block assumption that all pensioners are wealthy enough to be taxed to support re-distributive policies. 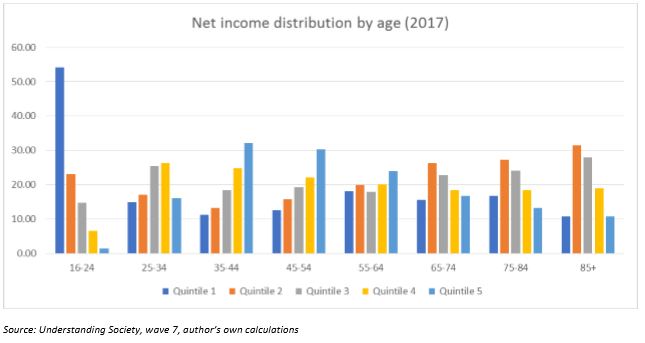 Looking at the above chart, one is instinctively drawn to that fact that over 50% of those between the ages of 16-24 are in the lowest fifth for net income in the UK. However, this conceals how many in this age group are in education or who have just started their careers. A more interesting finding is that a high proportion of people over the age of 65 are in the lowest two quintiles of net income. This represents just over 5 million adults over the age of 65 who have net incomes in the bottom 40% of people in the UK.

Intuitively, this is explained by the fact that older people, having left the labour force are in a period of decumulating their savings, and don’t require the same level of income they needed during their working life (i.e. for work-related travel and expenditures etc.). But it is also clear that not all older people are enjoying an abundance of disposable income. Inequality by its nature demands a form of redistribution, but taking from one generation to provide for another misses the point. Age and
income are not perfectly correlated and so designing policy on the back of this risks exacerbating existing inequalities.

Rather than being based on an arbitrary measure of age, policies based on income are more likely to have an impact. Another of the Intergenerational Commission’s suggestions, a “lifetime receipts tax”, does just that, by using inherited wealth as the basis for raising money, rather than age. Blanket payments for 25 year olds however play into the narrative of intergenerational inequalities being the ones that matter most, and do not address underlying structural problems, such as access to housing or education – problems which are to some extent felt by all. These broader problems could, in part, be addressed with the money intended to be raised for the Citizen’s Inheritance.

Ultimately, we must stop assuming generations are in conflict with one another. If re-distribution is necessary, it must be from those who can afford it, to support universal opportunities, so that everyone has the chance to improve their lives and to make the contributions the UK economy needs as it faces an uncertain future.

With thanks to Brian Beach for supporting data analysis

Dan joined the ILC in May 2018 as a Research Fellow. Prior to joining the ILC Dan was a research consultant at ComRes, specialising in political and social research. Whilst at ComRes Dan was responsible for much of the organisations high profile voting intention research, for clients including the Independent, BBC and The Sun. Dan also worked with social research clients including the Resolution Foundation, NASUWT, the LGA and the Chartered Institute of Building in conducting large scale quantitative, qualitative and mixed methods research projects.

Dean Hochlaf worked with the ILC from May 2016 to September 2018, when he joined the IPPR.

END_OF_DOCUMENT_TOKEN_TO_BE_REPLACED

What about the older generation rent?