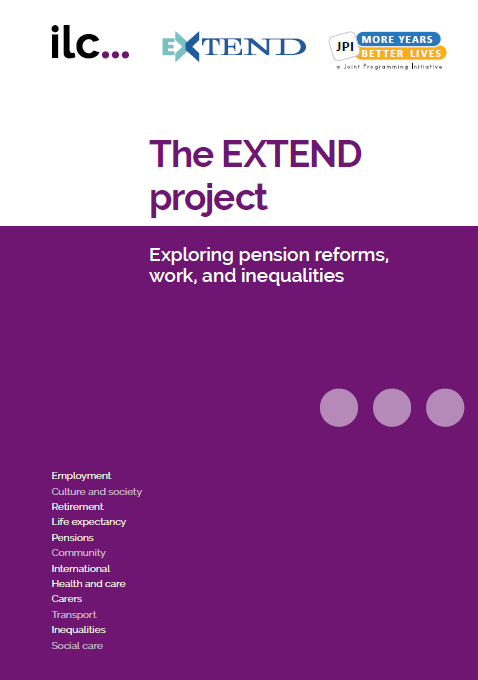 This report summarises some of the work of the EXTEND project, which examined the impact on social inequalities of policy initiatives and reforms to extend working lives in five European countries. It explores the findings and their implications for policy and practice.

Key findings from the research include:

• The expansion in the numbers and proportion of older people in work over recent years cannot be attributed to reforms increasing pension eligibility age. Instead, multiple factors have played a role in increasing labour force participation in later
life. However, these reforms have the potential to exacerbate inequalities.
• Modelling to simulate the effects of recent pension system reforms suggests that moves toward defined contribution (DC) pensions will lead to increased inequalities in pension income and wealth especially among less educated women. While a DC approach is more financially sustainable, it may be less socially sustainable.
• Chronic conditions are strongly associated with early labour market exit, and there are significant gender differences in
the conditions experienced, e.g. women are more likely to experience depression and arthritis. Prior working conditions can also impact health in retirement, so efforts to improve working conditions have a vital role to play in reducing health inequalities.
• Looking specifically at the health and care sector (HCS), EXTEND found little evidence of comprehensive approaches being taken to address long-term sickness and labour market exit among employees. The sector appears under-prepared for an ageing workforce, despite recognising finding skilled workers as a key challenge.

Key implications from this work are:

• Policymakers need to consider a wider range of approaches to encouraging work in later life, beyond reforms to pensions and pension eligibility ages. This should include measures to address health and wellbeing at work, to tackle age discrimination in the workplace, and to support those juggling work and caring.
• Workplaces are fundamental to health and wellbeing, so they should be made a priority setting for health promotion. Employers need to be encouraged and supported to take action toward primary, secondary, and tertiary prevention of ill health. These measures will be particularly important in sectors where early exit is widespread, such as the health and care sector.
• There is a need for ongoing monitoring of the impact of policy on extending working lives. It will be important to monitor the impact of pension age increases on patterns of work and benefit receipt. If policy changes only lead to more years spent drawing on other benefits before taking a state pension, the extending working lives agenda will not be effective in supporting fiscal sustainability.

Generation X: How can we improve their retirement income prospects?