The European elections and the great Brexit age divide

The European elections and the great Brexit age divide

Tomorrow, the UK will see yet another election in which the vast majority of the country’s younger and older citizens stand on opposing sides of the great divide of modern British politics: Brexit. Since David Cameron announced that he wanted to hold a referendum on EU membership in 2013, the vast majority of young people have consistently opposed Brexit, while the majority of their elders supported it. This contributed to age being one of the key predictors of vote choice in both the 2016 EU referendum and the 2017 general election (in which older pro-Brexit citizens overwhelmingly backed the Conservative Party while the younger, anti-Brexit voters flocked to Labour), and it is likely to be as effective in predicting which party – or group of parties – people choose tomorrow. As the graphs below show, the divide has been evident for weeks, with younger people far more likely to support Labour and (more recently) the Greens and Liberal Democrats, while older people are overwhelmingly supportive of the Brexit Party.

The graphs also show that there is at least one area of agreement between young and old: they are increasingly unhappy with the two major parties, and prepared to support smaller alternatives in the election. In early April, one in three of under-25s was planning to support Labour; since then, this figure has fallen to around quarter, while support for the Greens and Lib Dems (as well as the nationalist parties in Wales and Scotland) has grown. At the same time, the Conservative Party has gone from level-pegging with the Brexit Party (on 22 per cent) among older voters to level-pegging with the anti-Brexit Lib Dems (on 12 per cent). European elections are often used by voters as an opportunity to give the major parties a kicking, however it is remarkable to see quite so many abandoning both major parties in such a short time. While young and old will mostly vote for very different parties and their respective Brexit policies, there is some common ground in that people of all ages are increasingly prepared to ditch the major parties in favour of their smaller competitors. 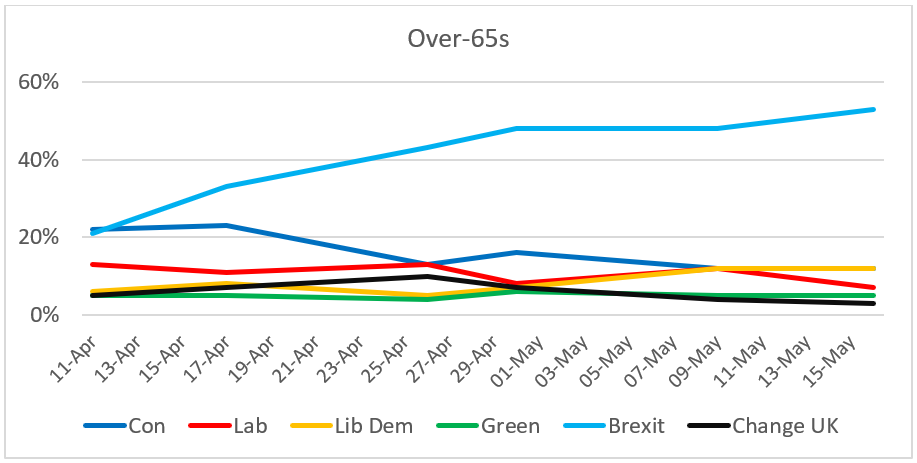 As well as declining support for the major parties, we have also seen a change in peoples’ expectations of actually voting in the European elections. Opinion polls frequently ask respondents how likely they are to vote in a forthcoming election, and as that election draws nearer the proportion who expect to vote invariably gets larger. What we are seeing this time, however, is that while the proportion of older people expecting to vote has grown since early April, the proportion of younger people has not. The graph below, for example, shows the proportion of respondents in four age groups – under-25s, 25-49, 50-64 and over-65s – who said that they ‘definitely would vote’ in the European elections in polls fielded between 10/11th April and 12/16th May. While the proportion of ‘definite voters’ has grown among the age groups over 50 by 13 points, the proportion of ‘definite voters’ under 25 has increased by only 1 point, and among the 25-49 year olds, by 2 points. 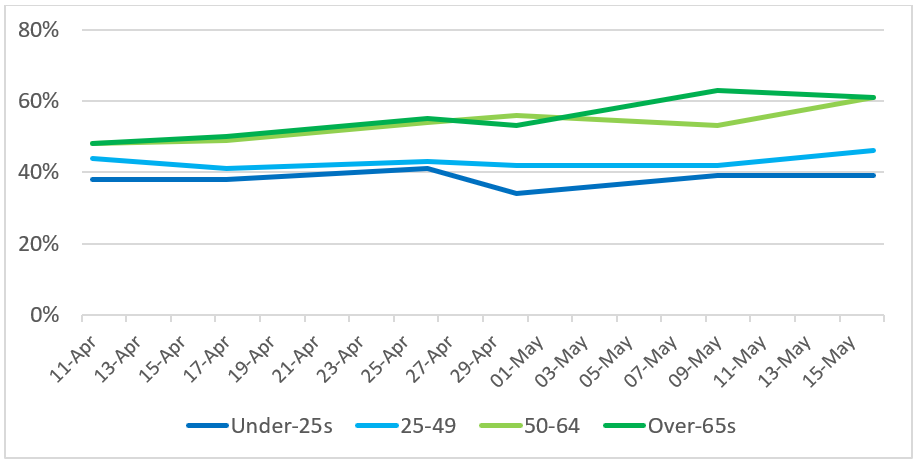 This is unlikely to be, however, a genuine ‘age effect’ in which older people are for some reason becoming more engaged with the European elections while younger people are not. Rather, what we are seeing is likely to be a ‘Brexit’, or more specifically, a ‘Brexit Party’ effect. In early April, for example, 45 per cent of those who voted ‘Leave’ in the 2016 referendum were ‘definite voters’; by mid-May, this figure had risen to 59 per cent. For those who voted ‘Remain’, however, there was essentially no change: the equivalent figures were 57 per cent and 60 per cent respectively. What has happened in that time is the Brexit Party has essentially exploded onto the scene and given disgruntled pro-Brexit voters something to support: a quick and straight-forward ‘no deal’ Brexit, fronted by a leader with considerable recognition among the public and formidable skills in campaigning and attracting media attention.

In contrast, there is no equivalent on the anti-Brexit side to appeal to younger, anti-Brexit voters. Labour – despite hoovering up the ‘Remain’ vote in 2017 – remains a pro-Brexit party. While the Brexit Party’s provides a clear outline of how they will deliver Brexit, the Greens, Lib Dems, Change UK and nationalist parties all want another referendum, with no guarantee that the result will be any different from the first. While Nigel Farage is well-recognised and an effective campaigner, the majority of voters struggle to name the leaders of the Greens and Plaid Cymru. The Lib Dems’ Vince Cable and SNP’s Nicola Sturgeon have more recognition, but neither can hope to rival Farage and both parties have ‘baggage’ (such as the Coalition or supporting an independence referendum) that might be off-putting. The only anti-Brexit party that could claim to be a new insurgent is Change UK – whose only success so far is to overcome the great age divide of Brexit and persuade young and old alike that they aren’t worth supporting: fewer than 5 per cent of under-25s or over-65s plan to vote for them tomorrow, and they even lag behind the Brexit Party among the under-25s.

While tomorrow’s elections are likely to be remarkable for poor results for the two major parties of British politics and relative success of smaller and insurgent parties, and for once again showing such stark divides in political preference between young and old, they also look set to tell a familiar story: the preferences of younger voters will not be as influential in shaping the result as that of their elders. At least part of the explanation is likely to lie with the success of the Brexit Party in mobilising older voters, and the failure of anti-Brexit parties to mount anything like as effective a campaign.