The macroeconomic implications of population ageing

The macroeconomic implications of population ageing

The 1st of October is the UN’s official International Day for Older Persons. According to the UN’s medium population projections, the number of people aged over 65 could rise from just over 600 million today to close to 2.5 billion by 2100. Indeed in the next 20 years, the older population is expected to almost double in size. Clearly the fact that populations are growing older is cause for celebration, with unprecedented gains in life expectancy the result of continued economic development and advances in healthcare and technology. But population ageing will also pose an economic and fiscal challenge. This special extended blog therefore discusses what ageing might mean for future economic growth and the sustainability of government debt.

Population ageing around the world 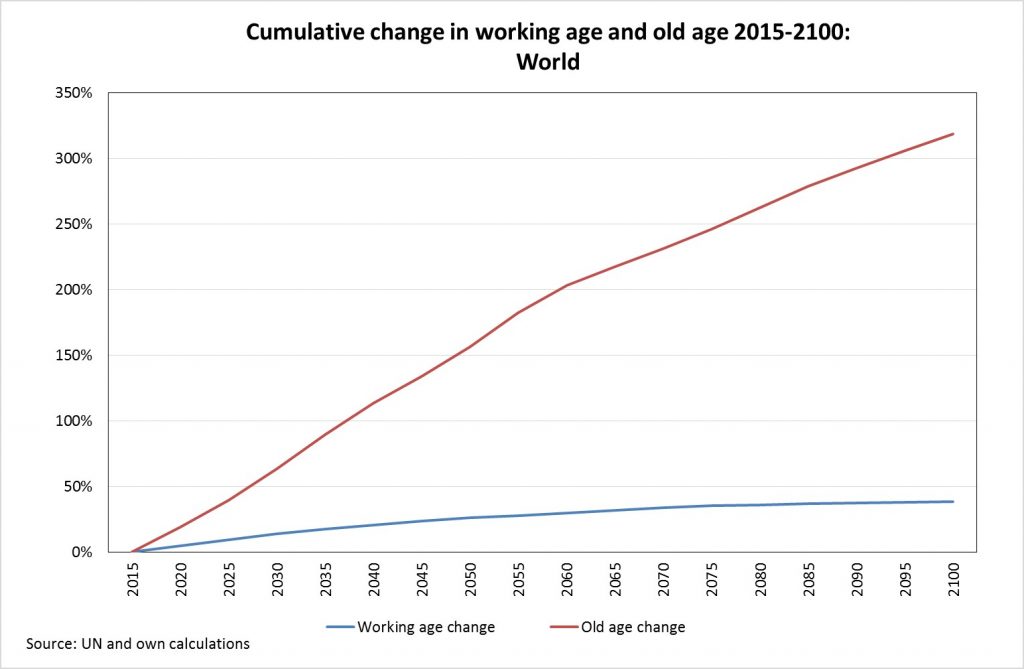 Developing countries will age most rapidly of all seeing a dramatic increase in the numbers of older people. Less developed countries will, for instance, see their older populations rise by nearly 4.5 times by the end of this century. 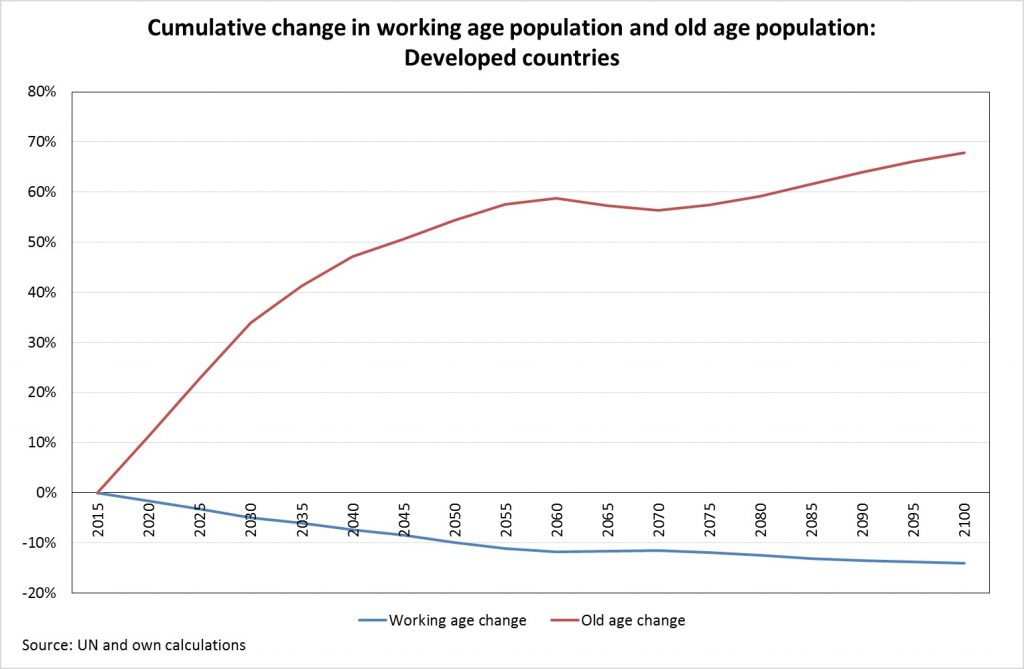 What does all this mean for dependency ratios?

Rapid population ageing in developing countries will result in sharp changes in the old age dependency ratio – which, in this context, is taken as the numbers of working age people for every older person (technically this an “inverse dependency ratio” but it is arguably easier to interpret). According to our calculations based on UN population projections, the world’s least developed countries will go from having around 16 working age people for every older person to around 4 by the end of this century. The developed world by contrast, will not experience such significant change. The developed world currently has 3.7 people of working age for every older person and this is expected to fall to 1.9 by the end of the period. The UK is expected to be broadly in line with the developed world – though it should be noted that its working age population is expected to continue rising well into this century. 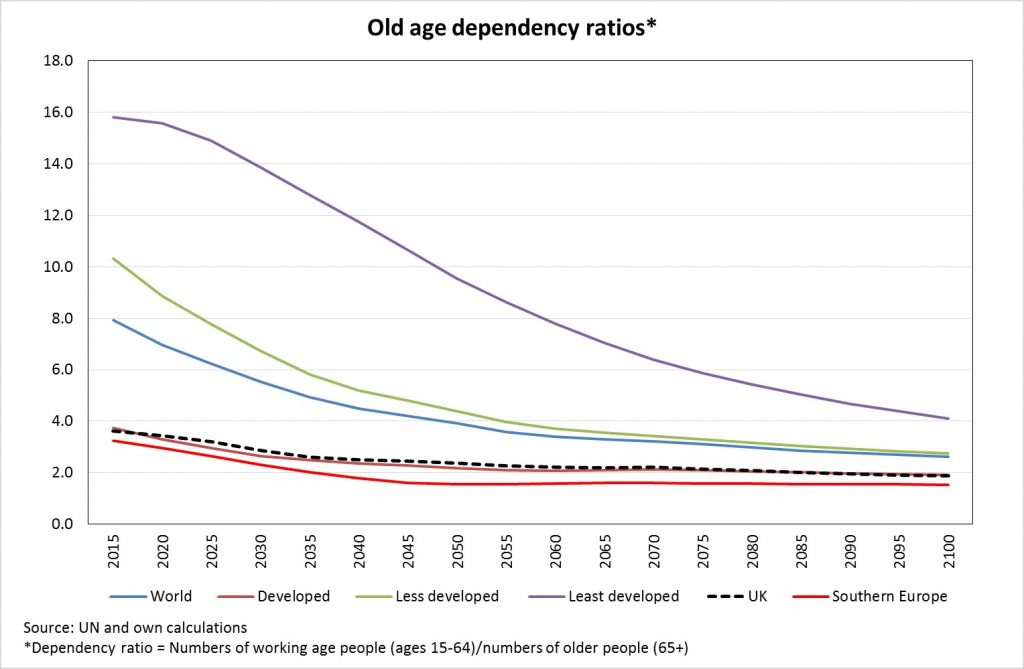 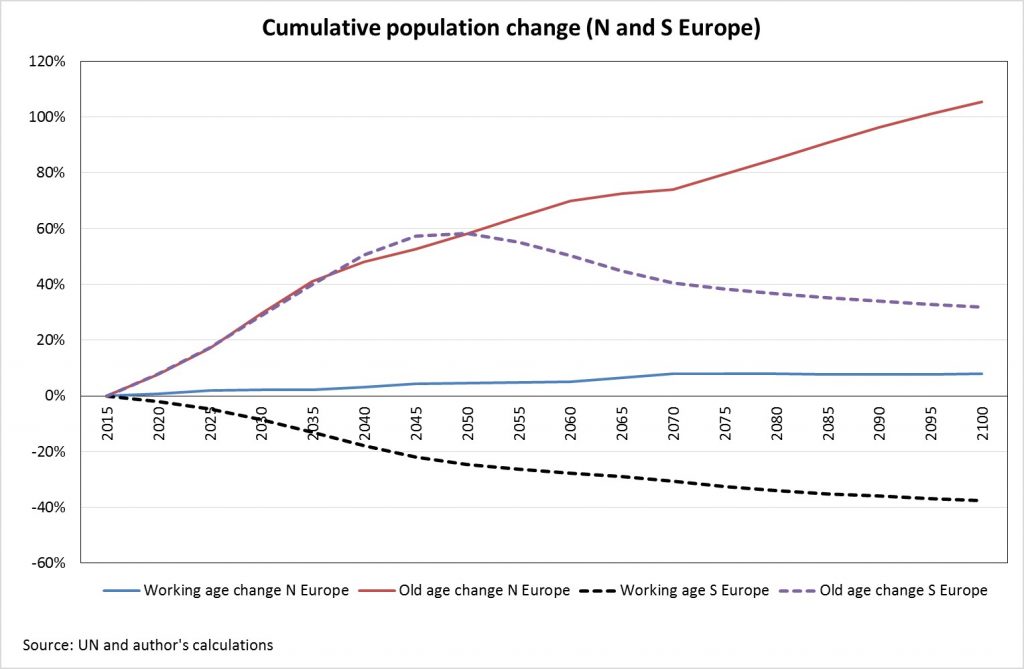 Why should we still care about dependency ratios?

While recent developments in terms of extending working lives, and delayed entry into the labour market for younger workers should not be taken for granted, the crude dependency ratio is still relevant from a public spending perspective. In the OBR’s recent Fiscal Sustainability Outlook, there is a chart outlining representative tax revenues and government spending for people of different ages in the UK today. It shows a clear bulge in taxation for those of working age, alongside peaks in government spending at younger and older ages. 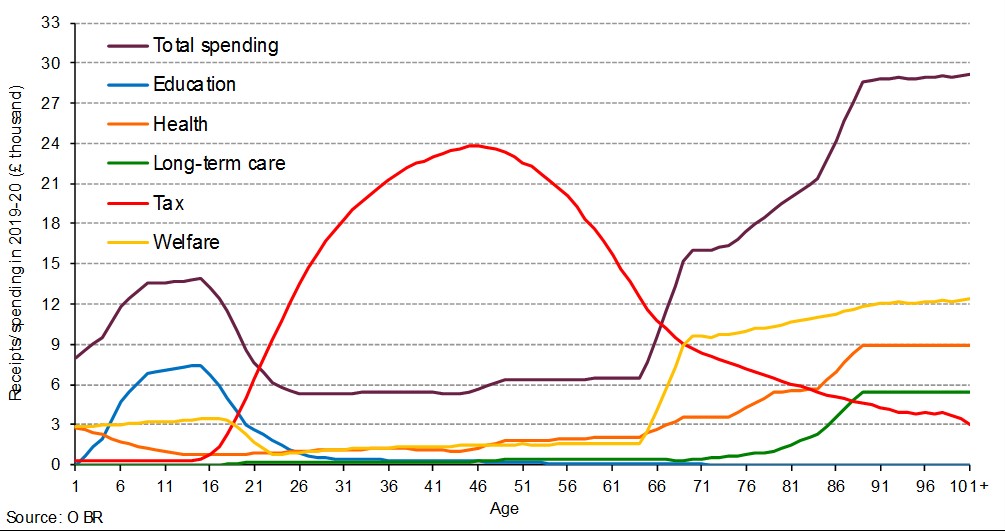 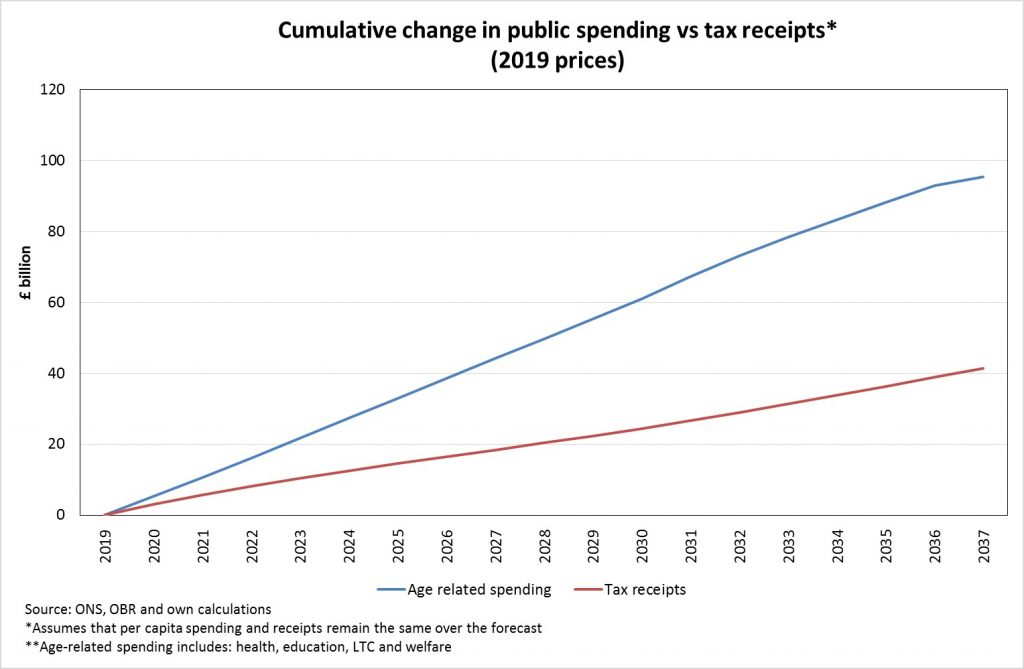 There are a number of ways in which to mitigate the potential economic and fiscal impacts of population ageing. Here we look at the potential of three plausible strategies in a UK context 1) boosting migration 2) raising productivity in the health sector and 3) encouraging longer working lives. There are, of course, more elements to consider including, and perhaps most importantly, the productivity of the labour force and we covered this in great detail in our analysis of the demographic challenges facing the Eurozone.

Migrant workers are typically of working age which means they help to boost the labour supply and contribute to economic growth and tax revenues. As a consequence, migrant labour can help to boost economic output and support lower levels of government indebtedness. The below chart from the OBR plots three different trajectories for debt as a proportion of GDP based on whether the UK experiences, high, low or central migration over the next 50 years. Based on the assumptions used, by the mid-2060s, the OBR projects that low migration could result in debts rising to over 100% of GDP by comparison to around 70% if we have high migration. 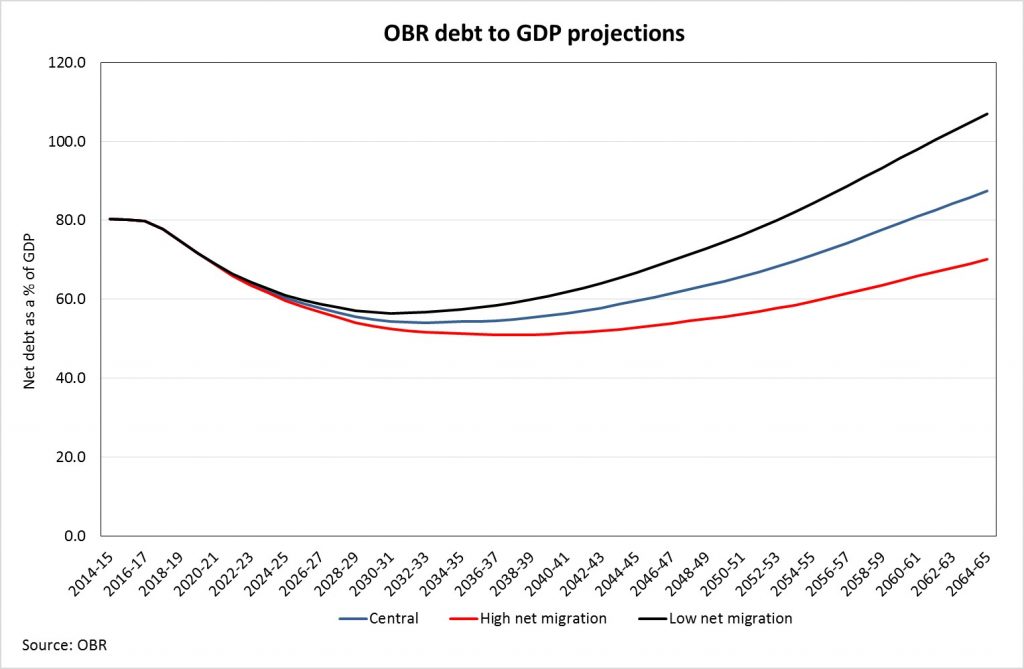 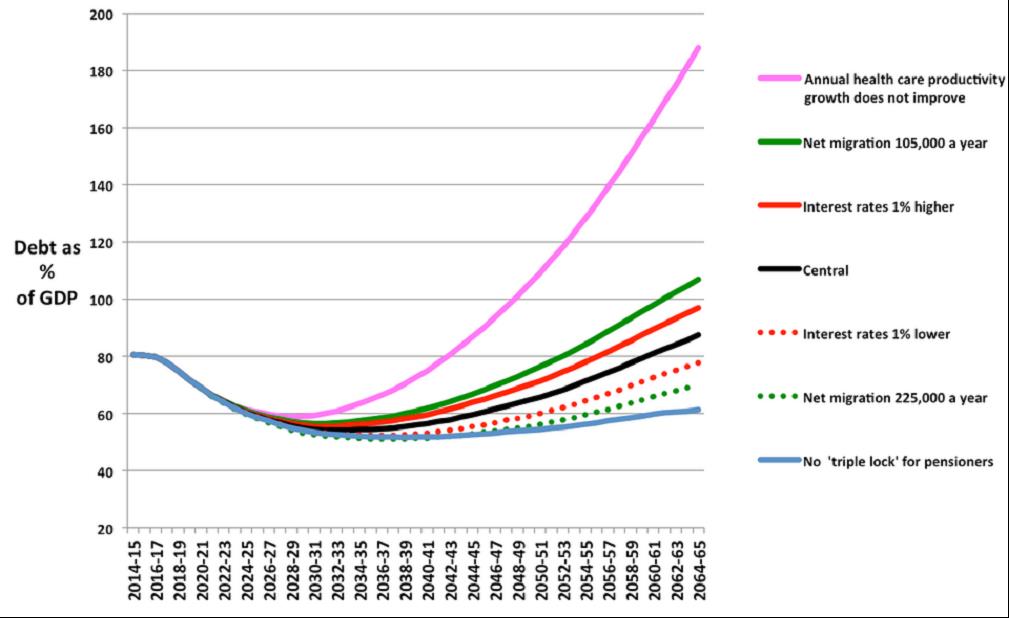 The ILC-UK has been at the forefront of the longer working lives debate and has estimated the potential economic benefit of supporting the “missing million” of older workers who are involuntarily forced out of the labour market back into work. In addition, in 2014 we used ONS data to show how small increases in the proportion of people working beyond the age of 65 allied to increased migration can make a real difference, at the margin, to economic growth rates over future decades. 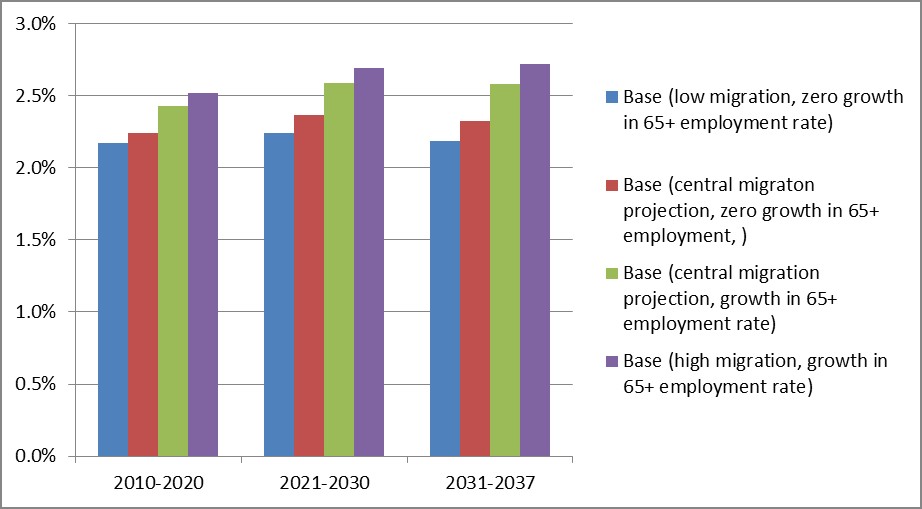 Source: ONS and own calculations

In truth, there is no silver bullet that will ensure we can secure rising prosperity in the face of population ageing. Ultimately it will take a concerted effort on many fronts, be that longer working lives, supporting productivity growth in health care and the wider economy and strategies to support migration where there are skills shortages in order to respond to the challenge of ageing. There may even be further attempts to boost the fertility rates of populations, though where this has already been tried in Japan it was relatively ineffective.

But as we stop to celebrate UN Older Persons day, perhaps it is now time to reflect on how as a global society we can develop appropriate and tailored long strategies to cope with the demographic revolution which is already in full swing.

David has worked in policy and research on ageing and demographic change for 15 years. David has a particular interest in older consumers, adult vaccination, active ageing, financial services, and the role of technology in an ageing society. He has a strong knowledge of UK and global ageing society issues, from healthcare to pensions and from housing to transport.

END_OF_DOCUMENT_TOKEN_TO_BE_REPLACED

Work for tomorrow: Innovating for an ageing workforce consultation paper