It is well-established that the UK’s prison population is ageing, but there is more to be said about changing demographic trends across the whole length of the criminal justice system, from charge through to rehabilitation. In this blog mini-series, Sally Bowell explores age-related trends in offending and discusses their implications.

Part One: Demographic change behind bars

It has been widely acknowledged that the prison population in England and Wales is ageing. As shown in Figure 1, in the last year alone there was a 4% increase in prisoners aged 60 and over and a 7% increase for those aged 70 and over. This is at odds with a general reduction in other, younger age groups.

Note that 50 and over is typically used in the literature to define the ‘older’ prison population, given poor life expectancy.

Since the early 1990s, we have seen several trends which can help to explain prisoner population statistics:

Life expectancy among the prison population is poor, although we do not have exact figures. The Prisons and Probation Ombudsman has reported that the mean age of death in prison is only 56, with most deaths from natural causes. Meanwhile, estimates from the US suggest that each year of incarceration reduces life expectancy by two years.The implications of this for the prisons system and for public policy are numerous:

Health and end of life care 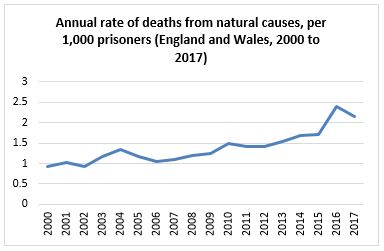 Additional, under-researched potential implications include ageism and discrimination in the prison system, as well as defining the health and care cost implications of ageing behind bars.

The changing face of those living behind bars will present challenges over the coming years, for prison staff, policy-makers and the courts. The needs of older prisoners must be adequately understood and catered to in order to ensure the appropriate distribution of resources. Creating a national strategy for older prisoners would be a valuable first step in ensuring that this demographic shift does not further contribute to pressure on our prisons.

The second instalment in this mini-series will look at the changing demographic profile of those going through the courts and being convicted of a crime, unpicking the trend of increased convictions for older adults, which is at odds with younger age groups.

Sally joined the International Longevity Centre as a Research Fellow in May 2017. Her work at the think tank has focused predominantly on health & social care, looking at topics such as music-based interventions for people with dementia, ageism in the breast cancer care pathway, and innovation in physical and mental health.