upporting people as they age is a key policy challenge for 2018, but new analysis shows that the burden of care is earlier felt by Lesbian, Gay and Bisexual (LGB) people than their non-LGB counterparts, raising the question of whether enough support is offered to this group.

Pride London  kicked off on June 9th with a month-long celebration of all things LGBTQ+. June marks the anniversary of a turning point in LGBTQ+ history, when on June 28th 1969, after a police raid on a New York, the LGBTQ+ community rioted against police brutality and societal discrimination. This was a catalyst for the gay rights movement worldwide, and in 1972 the first official Pride rally took place in London to celebrate sexual diversity and positively stand up to discrimination and stigma. Since then, although the legislative landscape has become more permissive towards Lesbian, Gay, Bisexual and Transgender rights in the UK (with the exception perhaps of Northern Ireland), some societal hostility remains, and many older LGBT people grew up at a time when being gay was illegal and/or stigmatised.

In ageing studies, we are still only at the margins of understanding how closely Lesbian, Gay and Bisexual (LGB) lives mirror or differ in their trajectories compared to their non-LGB peers. Our recently published research focussed on a small group of people aged 50+ that we identified as Lesbian, Gay and Bisexual on the basis of their sexual experience or sexual attraction (n=159) and compared their life course trajectories with non-LGB people (n=3488).

We compared how and when LGB people experienced transitions into adulthood (exits from full time education and the parental home, and entries into parenthood, partnership, and the labour market), and found that many LGB and non-LGB people appeared to have similar starts in life, albeit with the exception of rates of parenthood, which were lower and slower for LGB people. Differences in life course trajectories opened up afterwards, with LGB people appearing to suffer higher levels of financial hardship and higher levels of trauma (the latter based on a very small sample). We then examined trajectories of ageing, through examining differences in the age at retirement, the age at which people report providing care for a friend or relative, and the age at which people reported their first serious illness or accident.

While few differences were apparent in terms of the timing of retirement and ill-health, substantial differences were apparent in the provision of care. By the age of 54 years old, 25% of LGB people aged 50+ would have started to provide care for a relative of friend; this point occurred over 20 years later at 76 years old for non-LGB people. Caring responsibilities were also gendered among LGB people, with lesbian and bisexual women reporting particularly early assumptions of caring roles, and gay and bisexual men’s caring trajectories mirroring those of heterosexual women. A chart showing transitions to a care role is shown below. 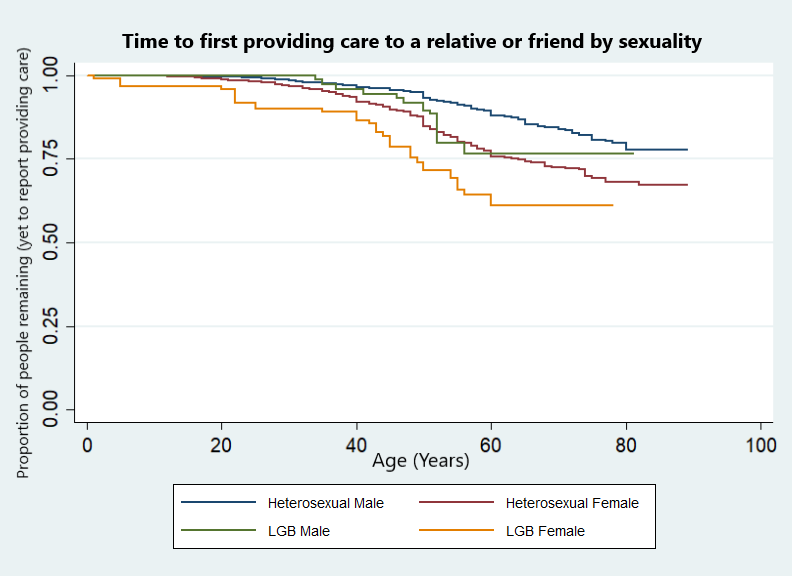 The findings are accompanied by a range of caveats with two of the most significant being around the size of the sample and around the method of identifying people as LGB. Nevertheless, the findings provide a starting point to theorising how LGB people might have different needs in later life, and what this might mean for service providers and policy-makers. For example, if LGB people are more likely to provide informal care, are they adequately supported? Similarly if LGB people experience financial hardship during their life course, how does this impact their later life financial health and what support is available? And what support needs might older transgender people have, who were not represented in the data we worked with. Developing answers to many of these questions can only be supported by better evidence on LGBT ageing, which is an aim of a project currently underway, sponsored by the Wellcome Trust and involving ILC-UK, University College London and Cardiff University.

While Pride is a month of celebration for LGBTQ+ people, it can also serve as a reminder to reflect on how well those who led the first marches in 1972 will be supported in retirement, and what actions policy-makers should take in order to promote equality for older people across the LGBTQ+ spectrum.

Dylan completed an ESRC-funded PhD at the Institute of Education examining transitions to parenthood and a Postdoctoral Fellowship examining housing transitions, both using birth cohort data (2005-2010). Prior to returning to the IOE in late 2014, he was Head of Policy and Research at Relate (a charity specialising in the delivery of counselling and promotion of mental wellbeing) and Head of Research at the International Longevity Centre-UK (ILC-UK), a think-tank exploring the implications of an ageing society.

Dr Rob French is a research fellow in the School of Medicine at Cardiff University.